In this clip from The Three Musketeers, a few lines of dialogue are manipulated to appear like they sound — as an echo. The clip features Athos (Matthew Macfadyen), one of the Musketeers, who has just been poisoned, sitting on the floor, looking down, while clutching the scrolled document he was bargaining for before being poisoned. Constantin Film, 2011. DVD. Echo effect produced by the author with Adobe After Effects. Featured caption: “Inactive until it came in contact with the liquid.”

Source: The Three Musketeers, 2011. DVD. Enhancements to the captions were created by the author in Adobe After Effects.

Source: VH1’s Pop Up Video, featuring Jewel’s “Who Will Save Your Soul.” 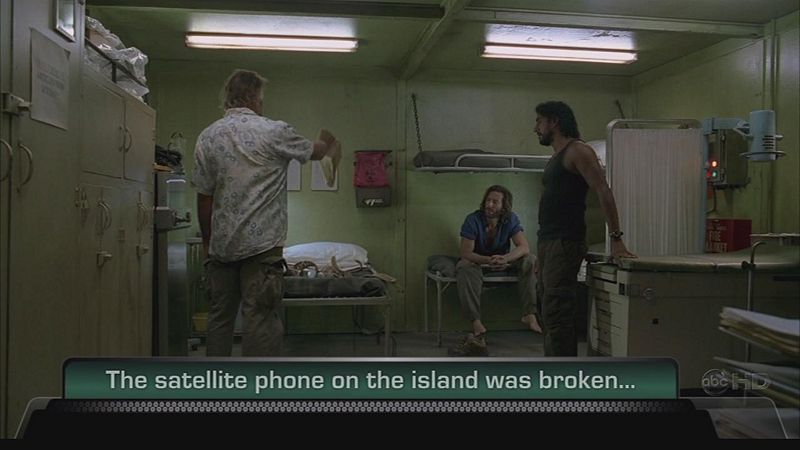 Source: A frame from an enhanced episode of Lost featuring the enhanced subtitle: “The satellite phone on the island was broken…” 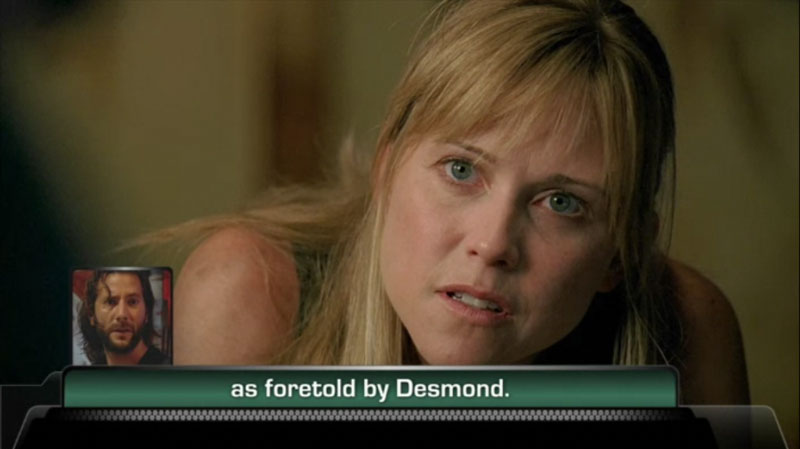 Source: A frame from an enhanced episode of Lost featuring the enhanced subtitle: “as foretold by Desmond.” A small image of Desmond is superimposed at the bottom left of the screen. 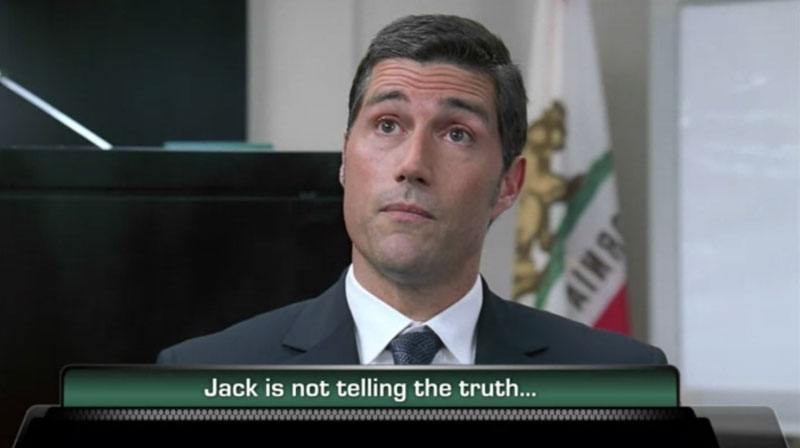 Source: A frame from an enhanced episode of Lost featuring the enhanced subtitle: “Jack is not telling the truth…”

Easter eggs, while rare in captioning, may nevertheless increase the level of interest in captioning among the general public. Dawn Jones, who runs the “I Heart Subtitles” blog, writes about a 2013 episode of BBC’s Sherlock that included, in the upper left corner of the subtitle track, “letters that acted as clues to viewers and was part of the promotion to encourage repeated viewing and speculation about the new series” (“Sherlock — The Clue is in the Subtitles,” 2013). As the letters H-I-S appeared one at a time over the course of the episode, they spelled out a hint that only viewers who were watching with captions could see.

Animated GIFs that rely on open subtitles or captions

Source: “The Walking (And Talking) Dead” — A Bad Lip Reading of The Walking Dead.

Source: Dustin McLean’s 2008 literal music video for Aha’s “Take On Me” was the first example of this meme/genre.

Source: A Reddit user (secularflesh 2013) describes waking his girlfriend with his “adolescent giggling” after reading a captioned description of a bodily function in a documentary: (COLOBUS MONKEYS FART) and (COLOBUS MONKEYS CONTINUE FARTING).

Other popular captions posted to social media sites include [silence] and [silence continues] from The Artist (2011). Silence captions call into question our assumptions about the very nature of captioning itself and thus raise awareness of captioning’s potential complexity and value. 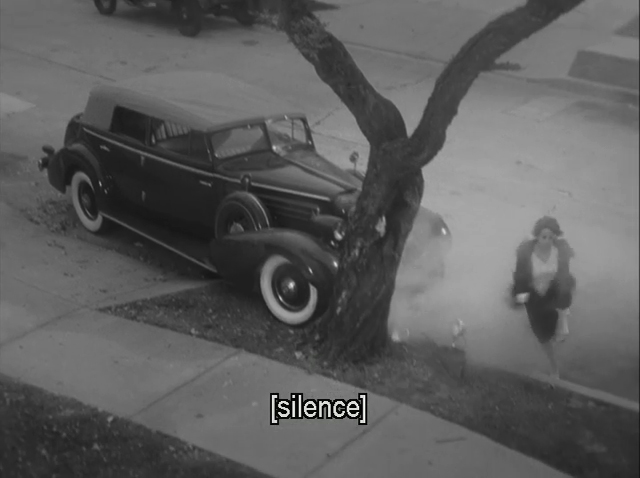 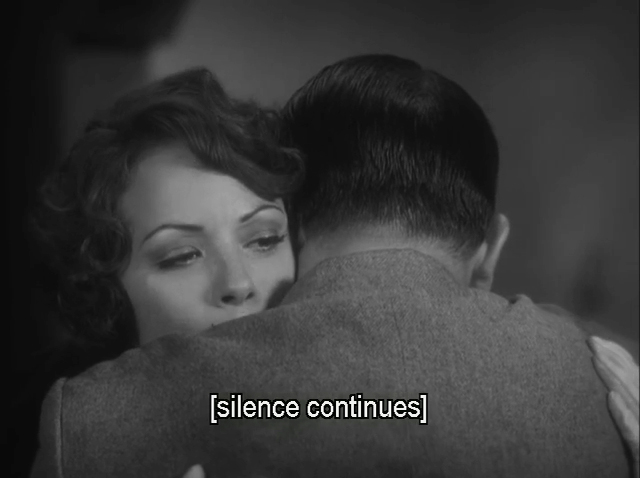 Source: “Fleetwood Mac – Landslide.” Captioned by Accurate Secretarial as part of The Closed Captioning Project. According to the description that accompanies this video: “Created this option of closed captioning to attempt to show both Stevie Nicks’s phrasing as well as presenting the entire lyric. The spectra serves both form and function in representing the music in a thematic way.”

Source: “Schoolhouse Rock – A Noun is a Person, Place or Thing.” Captioned by Accurate Secretarial as part of The Closed Captioning Project. According to the description that accompanies this video: “Demonstrating the greater capabilities of closed captioning.”

Fictional captions and internet memes call attention to the cognitive work that captions perform. The “[Intensifies]” meme can help us think through the problem of how to adequately describe modulating noise (see Know Your Meme, “[Intensifies]”). But the “[Intensifies]” meme, which often makes use a vibrating GIF image and static subtitle, describes actions that aren’t clearly linked with sounds at all.

Source: An example of the “[Intensifies]” meme featuring Shrek and Donkey from the Shrek movie. Caption: [Shrecking Intensifies].

Source: An example of the “[Intensifies]” meme featuring the Tardis from Doctor Who. Caption: [TARDIS INTENSIFIES].

Fictional captions continue this theme of describing actions and playing on characters’ personality quirks or traits: an image of a distraught Spock (Leonard Nimoy) from Star Trek [sobbing mathematically]; an image of an emotional Eleventh Doctor (Matt Smith) from Doctor Who as he [angrily fixes bow tie]; and an animated image of a seething John Dorian (Zach Braff) from Scrubs as he [screams internally]. These examples are intended to be playful and even absurd. In some cases, they don’t provide access to sounds to all. In others, they exploit characters’ personality or sartorial traits. 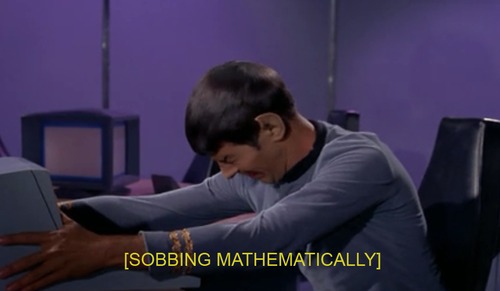 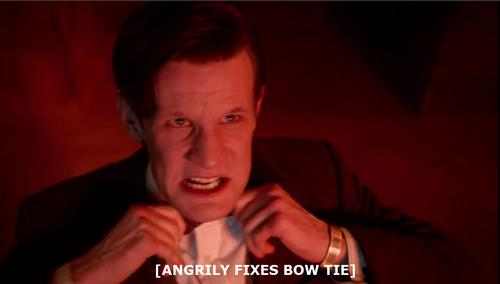 On the DVD for Snatch (2001), viewers can select a “pikey” track, which only displays subtitled translations of the hilariously thick English accent of Mickey O’Neil (Brad Pitt).

Source: Snatch, 2001. DVD. A excerpt from the “pikey” track, which only includes subtitles for Brad Pitt’s impossibly thick English accent.

On Swamp People (2013), an American reality TV series that follows a group of alligator hunters in Louisiana, the English but accented speech of these Cajun hunters is sometimes accompanied with hard-coded subtitles.

Source: Swamp People, “No Tomorrow,” 2013. Cable TV (History Channel). An example of English subtitles that are added occasionally to the English (albeit accented) speech of the Cajun alligator hunters.

On season 12 of Project Runway (2013), one of the contestants, Justin LeBlanc, wears a cochlear implant, identifies himself as deaf, and is accompanied on the show by a sign-language interpreter. His speech is also subtitled early in the season, much to the confusion of some viewers who didn’t feel his clear English speech warranted English subtitles.

Medium awareness and direct references to the subtitles

Check out my blog post on “Subtitles as visual art” in Night Watch (2004).