A recent tweet from @redpawn3 got me thinking about police and ambulance sirens in closed captioning, and specifically how much variety we are likely to find in siren descriptions:

To the people who write closed captioning… Is there ever a time the police sirens are going off but not wailing?

And then the other night we were streaming The Prophecy 3: The Ascent (2000), starring Christopher Walken, when the sirens started wailing: 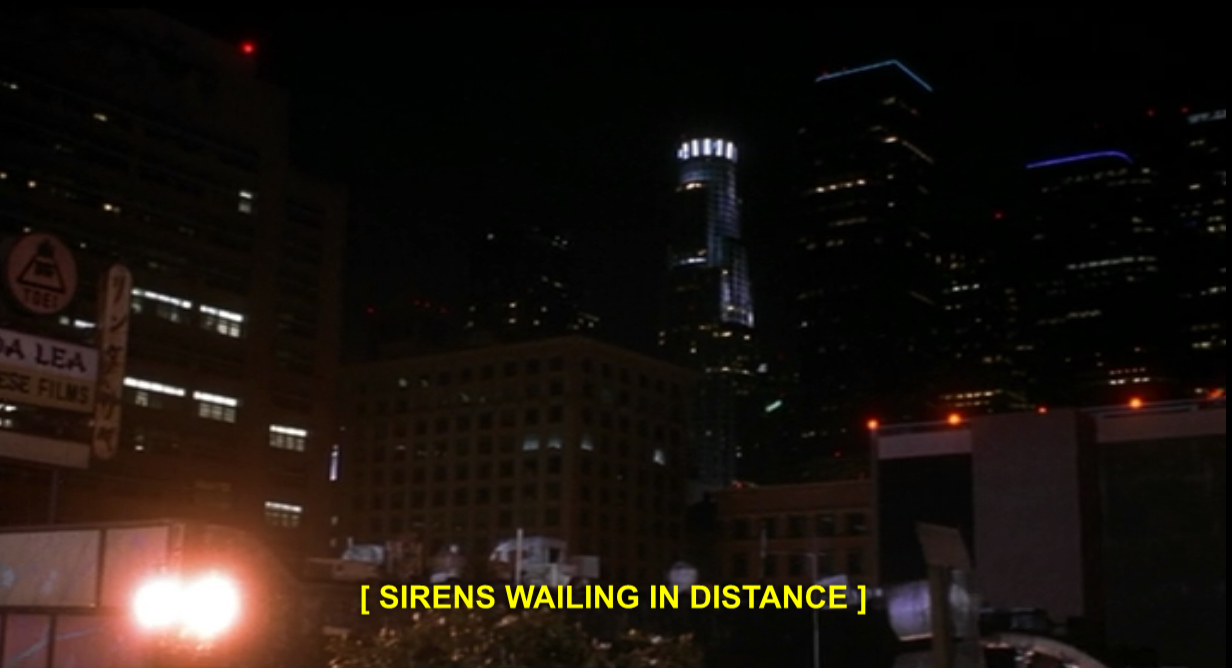 Source: The Prophecy 3: The Ascent (2000). Netflix. In this frame, a cityscape is shown at night. The caption: [SIRENS WAILING IN DISTANCE].

In Chapter 1 of my new book, Reading Sounds, I briefly discuss a scene from 21 Jump Street (2012) in which Jonah Hill and Channing Tatum are in hot pursuit of some law breakers on the other side of a public park. Instead of hauling ass in a cop car (with sirens wailing!), these cops are pedaling bicycles with tiny red lights on the handlebars. The tiny red lights can’t wail at all but only whoop softly — which contributes to the ridiculousness of this scene. Packed into this single caption is the reminder that these are not real cops because real cops would be burning rubber in a patrol car and blaring their sirens.

What makes (SIRENS WHOOPING SOFTLY) unusual is that sirens are not soft but loud by definition:

In my sample of popular DVD movies, sirens are overwhelmingly described as wailing. My sample is small: 41 official closed caption files, each of which was extracted by me from the official DVD discs. All of the texts in the corpus are major theater releases, with one exception (a television episode of CSI: NY). I’m only interested here in nonspeech captions, which are distinguished from speech captions because they are surrounded by brackets or parentheses. Nonspeech captions are rhetorically invented by the captioner.

Source: Dark Shadows, 2012. DVD. [POLICE SIRENS WAILING]. The sirens are faint as they approach. They only become loud (and truly wail) when they reach the viewer/camera.

Source: Killing Them Softly, 2012. DVD. [siren chirps] followed by [siren wails]. The chirp is a quick siren burst, usually made up of a small number of short “whoops” in quick succession. In this clip, the siren chirps three times. A quick google search suggests that the chirp call is used as an attention-getting device by police officers who do not need to run their sirens in full emergency (wailing) mode (see this Reddit discussion).

66 total hits for “siren” in my corpus

Some general thoughts about these siren captions

Evaluating nonspeech captions in a series

Some nonspeech closed captions come in a series of two or more and should be evaluated as a series. I could have included continues as a separate verb for sirens along with wailing, blaring, and so on. But I think we need to look to the previous caption(s) in each series to inform the meaning of continues captions. For example, in Shaun of the Dead (2004), the siren is described as blaring, which establishes a sonic timeline that persists in the continues caption that appears six seconds later:

In other words, the siren doesn’t just continue in the second caption but continues blaring (albeit faintly), because the present participle (-ing verb) suggests continuous, ongoing action. The meaning of “siren continues” is thus informed by the previous reference to blaring. Blaring is assumed in the continues caption. Fading and dying captions may work in a similar way as part of a series of captions.

Are verbs optional with siren descriptions?

These simple noun descriptions — siren without a qualifying verb — suggest, perhaps, that siren is rich enough in meaning not to require wailing every time it’s used. Sirens are loud by definition. It’s telling that loud is never used in my corpus to qualify the meaning of siren (e.g. “loud siren”).

We might consider (sirens approaching) here too as another noun-based description. In closed captioning, approaching is like fading, dying, and continuing; it doesn’t define the nature of the sound so much as its location or change of state from active to inactive.

No, not always. But they wail often enough that “sirens wailing” may come to feel like boilerplate language for regular readers of closed captioning. As [siren chirps] suggests, sirens have more than one function. They don’t always wail (and wailing might not be the most appropriate caption for siren sounds in the distance). Being as specific as possible with a description is never a bad idea. In addition, in the interest of efficiency and when warranted by a clear visual context, (siren) might also be explored for its potential as a noun-based description on par with (applause) or (gunshot).

What else wails in closed captioning?

Perhaps (DRONE WAILS) is most surprising. We don’t usually think of drones wailing in alarm but rather operating as quietly as possible in the interest of stealth surveillance and/or attack. In Oblivion, an alien attack drone has been captured. When the resistance fighters reactivate it, its alarm sounds.

Let’s keep going with this method

This line of inquiry can be a productive way to explore meaning in closed captioning. The method goes like this: choose a recurring nonspeech caption or action and track its appearances in a database of closed caption files. Import caption data into a concordance program, code captions in Excel or another program. Make sense of the complexity of the results.