Figure 2.1. Single captions can be packed with implied meaning.

A frame from Man of Steel shows a school bus driver with pursed lips wearing a baseball cap and gripping the steering wheel in concentration. A boy stands in the aisle a few rows back, head turned away and down. The camera aims straight through the front windshield. The caption is a two-sounder, discussed in more detail in this chapter: [TIRE POPS AND KIDS SCREAM]. When and is used as a connector instead of then, the logical relationship between the two sounds is obscured. The kids scream because the tire on the bus pops. Readers must supply the missing inference. Warner Bros, 2013. DVD.

Source: Beasts of the Southern Wild, 2012. DVD. Featured caption: “MAN: [OVER THE BULLHORN]: This is a mandatory evacuation area.”

Complexity and nesting in non-speech information

Frame grabs of all eight types of Channel Identifiers that are nested inside Speaker Identifiers in District 9 (2009). The channels include TV, Radio, PA, Microphone, Monitor, Phone, Headset, and Recording. 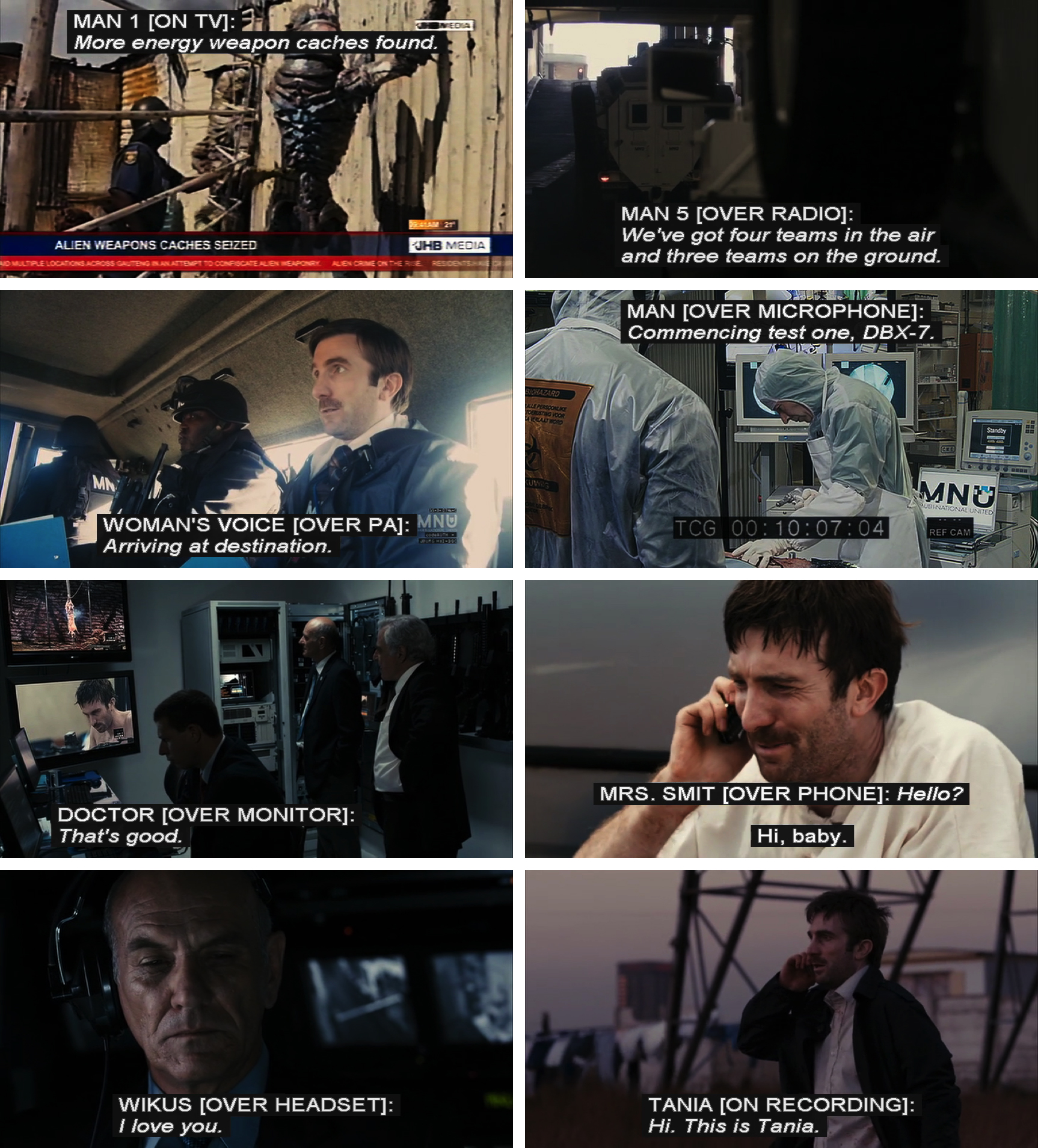 Multiple sounds from different categories inside the same caption

In Man of Steel (2013), [LOIS GRUNTING] is immediately followed in the caption track by [CLARK GRUNTS]. The captioner follows convention: Lois’ multiple vocalizations (including panting) are contrasted with Clark’s single, discrete grunt. Readers learn these conventions, processing them quickly despite their complexity.

In this example from Avatar (2009), Neytiri’s (Zoe Saldana) vocalization is described as (LAUGHING) in response to Jake (Sam Worthington) pulling her tail. A few seconds later, she (LAUGHS) as she leads him deeper into the forest and the Tree of Voices. The distinction between (LAUGHING) and (LAUGHS) is not obvious. The former may be just a bit more intense, lasting slightly longer with greater inhalation of breath. Unlike sustained or repeated coughing, which can be easily distinguished from a single cough, the distinction between a single laugh and sustained laughter is not similarly clear. Here’s where discrete sounds blur into sustained sounds.

Two-sounders: Using “and” or “as” connectors to imply simultaneity 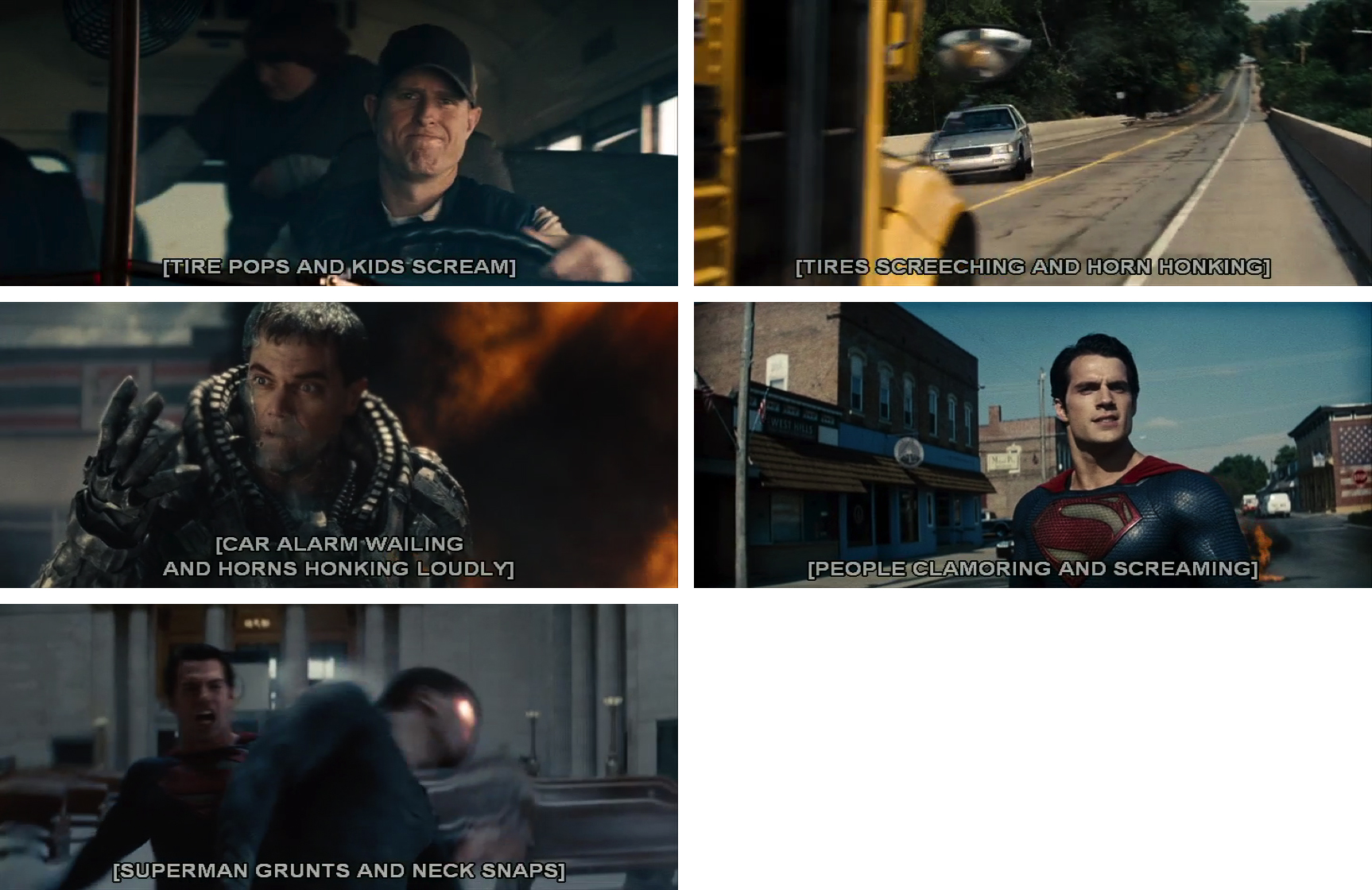 Two-sounders: Using “then” connectors to imply logic and sequence

Source: Parallels, 2015. Netflix. Featured caption: [MIMICKING A BOMB WHISTLING THEN EXPLODING]. He’s actually pretending to shoot himself in the head.

Verbs at the heart of most sound descriptions

Nouns at the heart of some sound effects captions 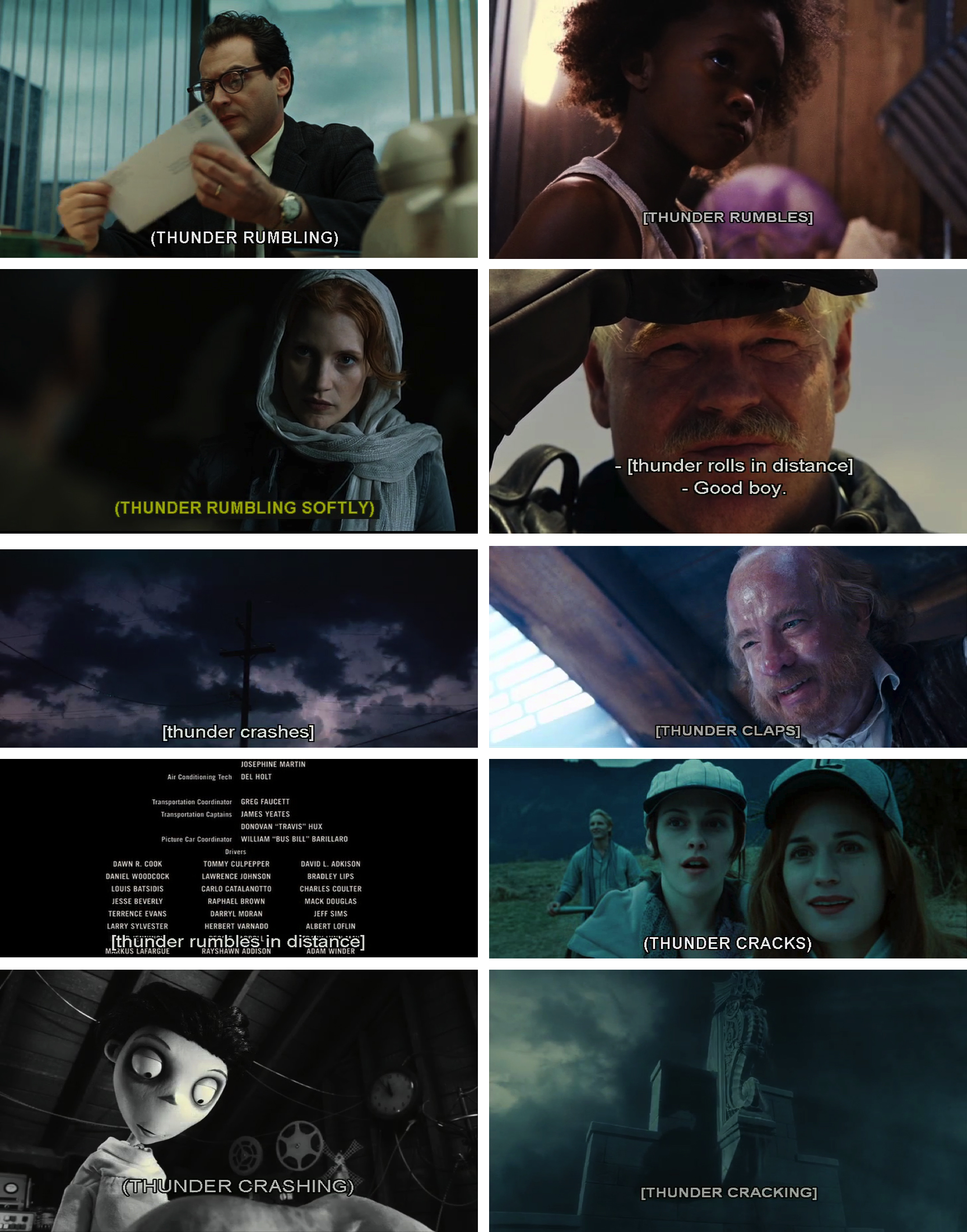 Table 2.2. A comparison of non-speech information across four action movies in DVD format.

Each percentage refers to the proportion of that film’s NSI captions that correspond to each category. The number is the raw number of NSI captions in that category. Percentages will not add up to 100% because single captions can be tagged in multiple categories.

In this example from Man of Steel (2013), a music lyric is indistinguishable from speech, even though it is preceded by a music caption: [SINGING]. For this reason, the lyric wasn’t captured by a simple software program designed to separate speech captions from non-speech information.

Two examples of coded non-speech captions from Inception. Coding was done in Microsoft Excel. During the movie’s second dream sequence in which Cobb (Leo DiCaprio) begins to train Ariadne (Ellen Page) on the rules of the dream space, two music captions – [“NON, JE NE REGRETTE RIEN” PLAYING] and [MUSIC STOPS] – are preceded by seven sound effects captions that, while they are interrupted by speech captions, are not interrupted by any other type of NSI (with the exception of Speaker IDs). Following the music captions are four additional, uninterrupted sound effects. The pattern – seven sound effects captions, two music captions, and four additional sound effects captions – stands out against a background of coded randomness. The build up of sound effects around the music captions allows us to see the action in the movie in a new way, through the lens of the closed captions. Granted, this particular dream sequence is only associated with the final two of the first seven descriptions that make up the first sound effects block: [CUP RATTLING] and [RUMBLING]. Nevertheless, when we extract NSI from speech captions and code them, we become more sensitive to potential patterns that are easy to miss otherwise. The same patterning persists during the next captioned reference to the “kick” music, this time with a band of five sound effects captions preceding one music caption for Piaf’s song. The dream space is violent, volatile, and frenetic – no wonder sound effects dominate during the scenes when characters are collaborating inside a shared dream. But an analysis of NSI captions can assist us in revealing that volatility, demarcating the dream space, and reinforcing a possible hierarchy in which characters are at the mercy of external forces when they enter a subject’s dream. The movie explains the violence inside the dream world in terms of the subconscious of the subject reacting to the presence of intruders by trying to kill them. (“The subject realized he was dreaming and his subconscious tore us to pieces.”) These external forces are expressed as a preponderance of sound effects captions.

Consecutive NSI doubles and triples in Man of Steel

All verb forms are counted in the results. For example, [grunt], [grunts], and [grunting] were included in the same category (“Grunt”). Only verbs used more than once in each movie are listed. If a verb was also used for sound effects captioning (e.g. “metal groaning”), it was not included in the totals.

Another example of paralanguage in Oblivion: Back-to-back (GRUNTS). The captions are thirty-six seconds apart. No other speech or non-speech captions appear during this interval, even though the interval between (GRUNTS) is filled with a variety of sound effects. This clip suggests that paralinguistic speech sounds were privileged over sound effects in this scene. Even though human vocalizations may stand out to captioners and be easier to caption — indeed, (GRUNTING) can serve as a catch-all term for human vocalization in captioning — sound effects create the suspense in this scene and lend credence to our initial assumptions about the Scavs who are trying to capture the hero (Tom Cruise). There are quite a few sound effects in this clip as soon as the attack begins — futuristic laser and traditional gunfire, pounding drums, metallic crunching, dragging sounds, wind whooshing, electronic beeping, papers shuffling, explosions, footsteps — but the most important sounds are coming from the Scavs. The Scavs are hiding in the darkness. We can see nothing of them but their orange eyes as they move quickly in the shadows. They’re chittering, growling, and at times possibly yelling. They’re speaking in what sounds like an echoey foreign language. The sounds are intended to be creepy and scary but most importantly to give support to the belief that these creatures are aliens. (Spoiler: They turn out to be humans, which is why it’s important to keep up with the lie, at least at this point, that they must be aliens. The sound effects propagate that lie. The captions fail to do so.) 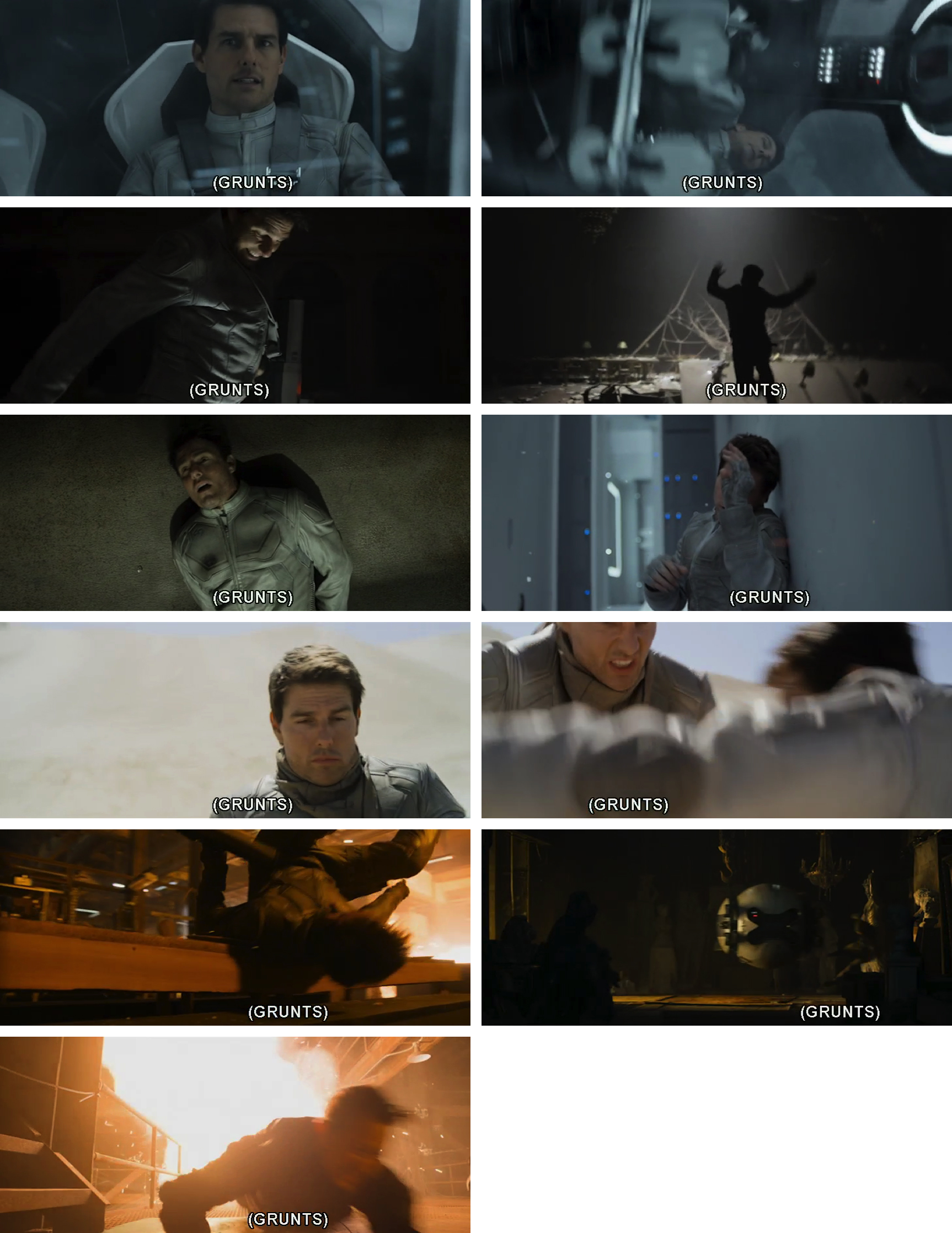 Whereas “grunting” is masculine in Oblivion, “screaming” is feminine. Out of a total of six scream captions, four are attributed to women (frames 1-4) and the remaining two are attributed to crowds that include a combination of men, women, and children who are fleeing the alien technology (frames 5-6). But women only scream off-screen in the captions, which is apparent in the first four frame grabs featuring Tom Cruise and a helicopter. Not surprisingly, the camera’s focus remains on the male lead. When Cruise is injured (frames 1, 2, and 3), the women in his life scream for him as off-screen supporting players. 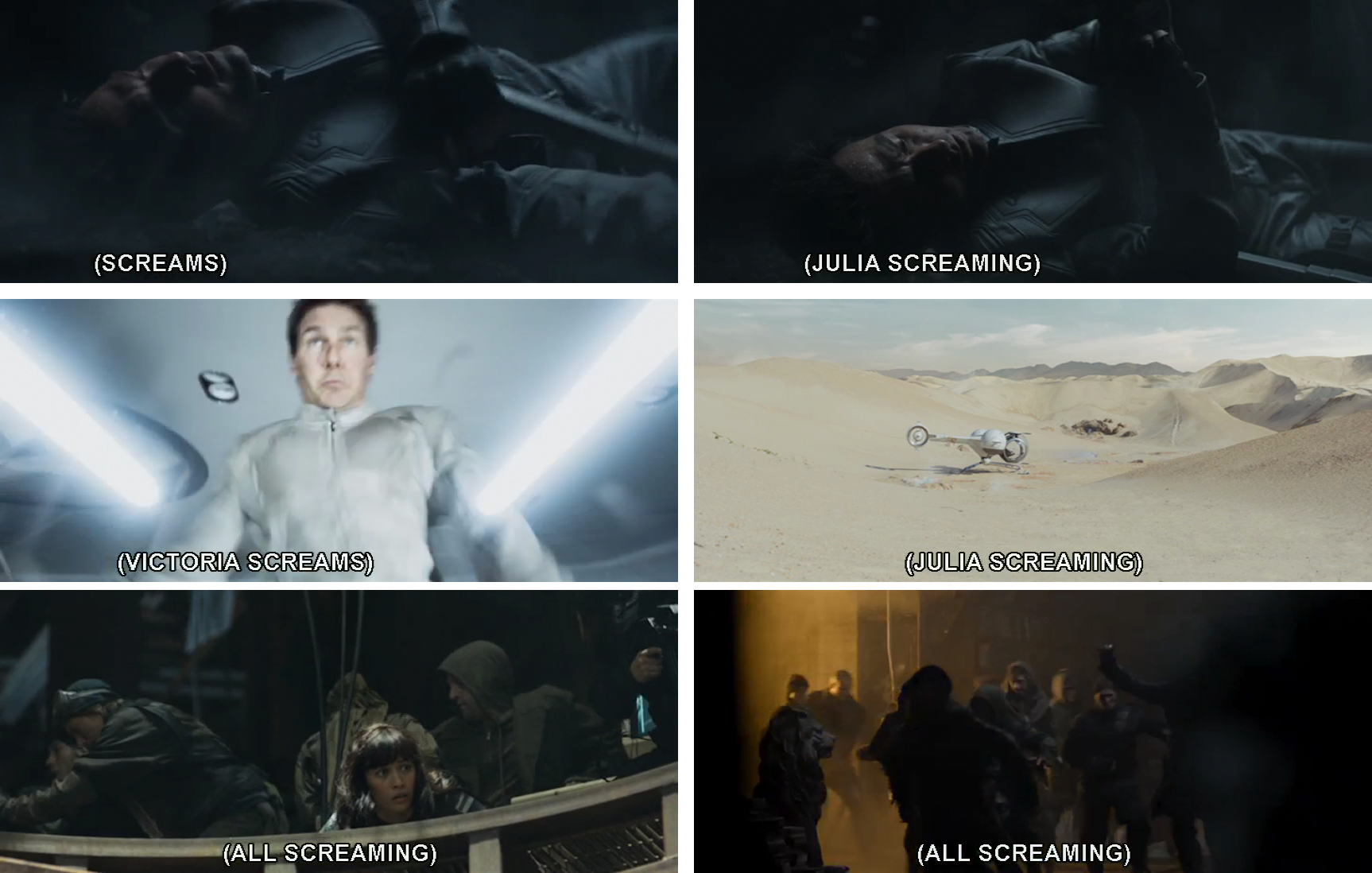 Onomatopoeia vs. function in closed captioning: An example of the former from Man of Steel featuring Superman yelling “Ragh!”

Source: The Internship, 2013. DVD. Featured caption: “No one believed in the welder girl, but she believed in herself.”

Source: The Internship, 2013. DVD. Featured caption: “Let’s fix that before the wife gets home — am I making sense?”

Source: Resident Evil, 2002. Cable TV (Reelz). The clip features scroll-up style captions in three-line format. They are very poorly timed and nearly unusable. Because of the poor timing and lack of logical line breaks, it’s difficult to follow the conversation.