Figure 7.1. Sounds from the past continue to resonate in the present.

In this frame from Close Encounters of the Third Kind, Claude Lacombe (François Truffaut) makes a hand gesture by holding his hand chest high, horizontal with the ground, and fingers held together. In the Kodály method of hand signs, Lacombe is making the mi sign, the second of four signs associated with the movie’s famous five-note motif. He looks towards the viewer’s right. He is joined by three other men, one of whom plays the five-note motif on an offscreen electronic keyboard. All four are looking in the same direction towards the offscreen alien ships on the viewer’s right. All but Lacombe are wearing headphones. The five tones are captioned as [notes playing on keyboard] and have, since the movie’s release, been invoked in countless other movies and TV shows. Columbia Pictures, 1977. DVD.

An explicit reference to Soap in a clip from Family Guy (2006).

Source: Family Guy, “Bango was his Name-Oh!” 2006. Netflix. Featured caption: “Will our younger viewers get this Soap reference?”

A Honda commercial featuring an iconic but uncaptioned 1980 song by Ozzy Osbourne.

Captioning uncredited narrators in The Other Guys and other examples.

Source: The Other Guys, 2010. Instead of crediting Ice-T by name for his bookend narration, the captions refer only to NARRATOR.

Source: TV commercial for Esurance, 2010. Instead of crediting John Krasinski by name, the captions refer only to [Male Announcer].

Why it’s important to know that the narrator of Arrested Development also played Opie on The Andy Griffith Show.

Arrested Development offers another example of an uncredited but well-known narrator. Ron Howard, the legendary child actor, Happy Days star, director, and Oscar winner, provides uncredited narration for the show’s original fifty-three-episode run over three seasons on Fox, as well as the fifteen episodes of season four, which were released as a Netflix original in May 2013. Howard is also executive producer for the show. When Howard is providing narration for the show (which he does multiple times in each episode, including during the opening credits), the captions either identify Howard’s voice as [Narrator] or set his speech in italics to denote offscreen speech.

Source: Arrested Development, “Indian Takers,” 2013. Netflix. The narration, supplied by Ron Howard, that opens this episode is identified with a Speaker ID: NARRATOR.

Source: Arrested Development, “Forget Me Now,” 2005. DVD. The narration, supplied by Ron Howard, that opens this episode is not identified with a Speaker ID or any other notation.

The narrator needs to be named in the captions when the narrator is as well known as Howard and also because the narration (like the show itself ) is occasionally self-referential. For example, when Howard takes issue with one of the characters calling George Michael (Michael Cera) “Opie” in “Public Relations” (2004), the joke hinges on viewers knowing that Howard is the narrator and that he played Opie as a child on The Andy Griffith Show. Knowing only one of these pieces of information is not enough to get the joke. Howard’s response to the Opie reference, makes no sense unless you know that Ron Howard is the narrator and that he played Opie.

Source: Arrested Development, “Public Relations,” 2004. DVD. Ron Howard is identified as [Narrator], but [Narrator] is insufficient because caption readers need access to the narrator’s identity in order to understand the reference to Opie.

Examples of the five-note motif in Close Encounters of the Third Kind (1977).

Bonus: Sonic allusions in Close Encounters of the Third Kind

Source: Close Encounters of the Third Kind, 1980. DVD. In the 1980 Special Edition, Roy Neary (Richard Dreyfuss) enters the spacecraft at the end of the film. A two-line melody from “When you wish upon a star” (from Disney’s 1940 Pinocchio) is incorporated into John Williams’ score, an appropriate choice given that Spielberg reportedly found inspiration for Close Encounters in the song. Featured caption: [“WHEN YOU WISH UPON A STAR” PLAYING].

The five-note motif in Supernatural and South Park.

In this frame from Paul, a large canister firework called The Five Tones is shown in close up. A small firework to the left of the canister is shaped like a saucer UFO. Caption: (ELECTRONIC MUSIC PLAYING). Universal Pictures, 2011. DVD. 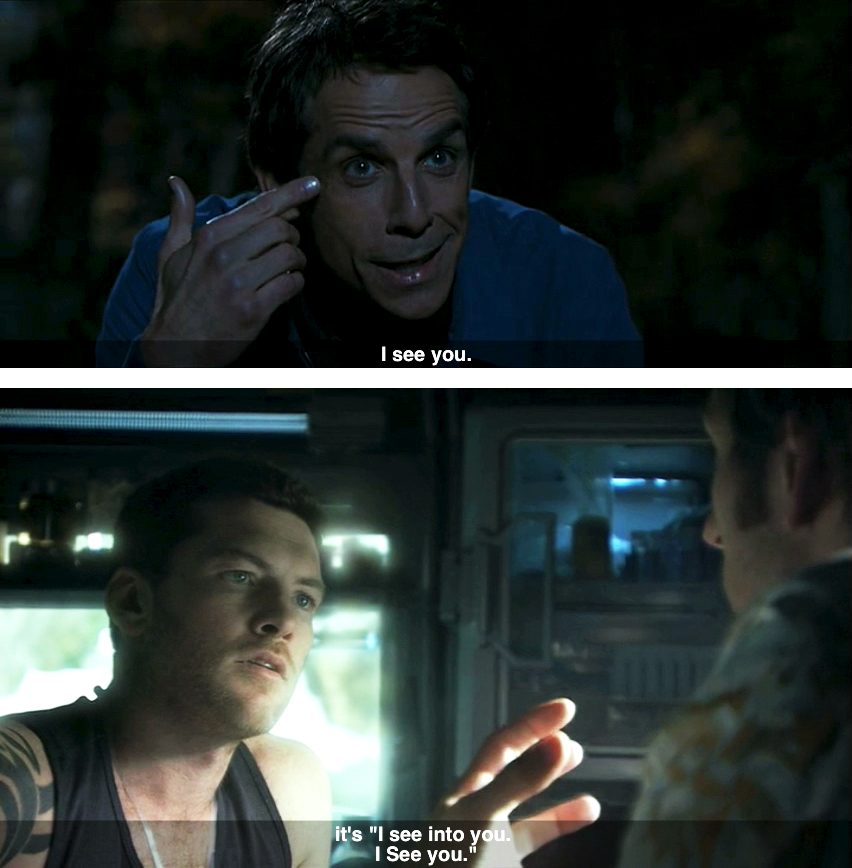 Source: A frame from The Watch featuring Ben Stiller saying “I see you” and a frame from Avatar featuring Joel David Moore saying “it’s ‘I see into you. I See you.'” Note the capitalization of See to denote a special kind of perception and understanding associated with the Na’vi people. Stiller is invoking/parodying Avatar. Should the captioner have capitalized See to acknowledge the allusion?

One substantive element of the horror genre, for example, is the moment at the end of most horror movies when we think the bad guy (or monster, alien, evil force, etc.) is finally dead, only to see him or it rise once more. That moment is a lie. Captions need to convey that lie to us, in whatever sonic form or style it takes, particularly when that lie is genre defining. For example, at the end of Halloween 5: The Revenge of Michael Myers (1989), rebroadcast recently on AMC, young Jamie Lloyd (Danielle Harris) believes the evil Michael Myers (Don Shanks) is dead after his car hits a tree, because the (horn blaring) suggests that his body is resting lifelessly against the car horn. A look of relief crosses her face, until the (horn stops blaring) and the chase resumes again, the movie making good on the horror genre’s promise of a premature death and resurrection for the bad guy. Captioners need to be attuned to this genre-defining moment, taking care to caption both the lie and the truth when they are sonically dependent. 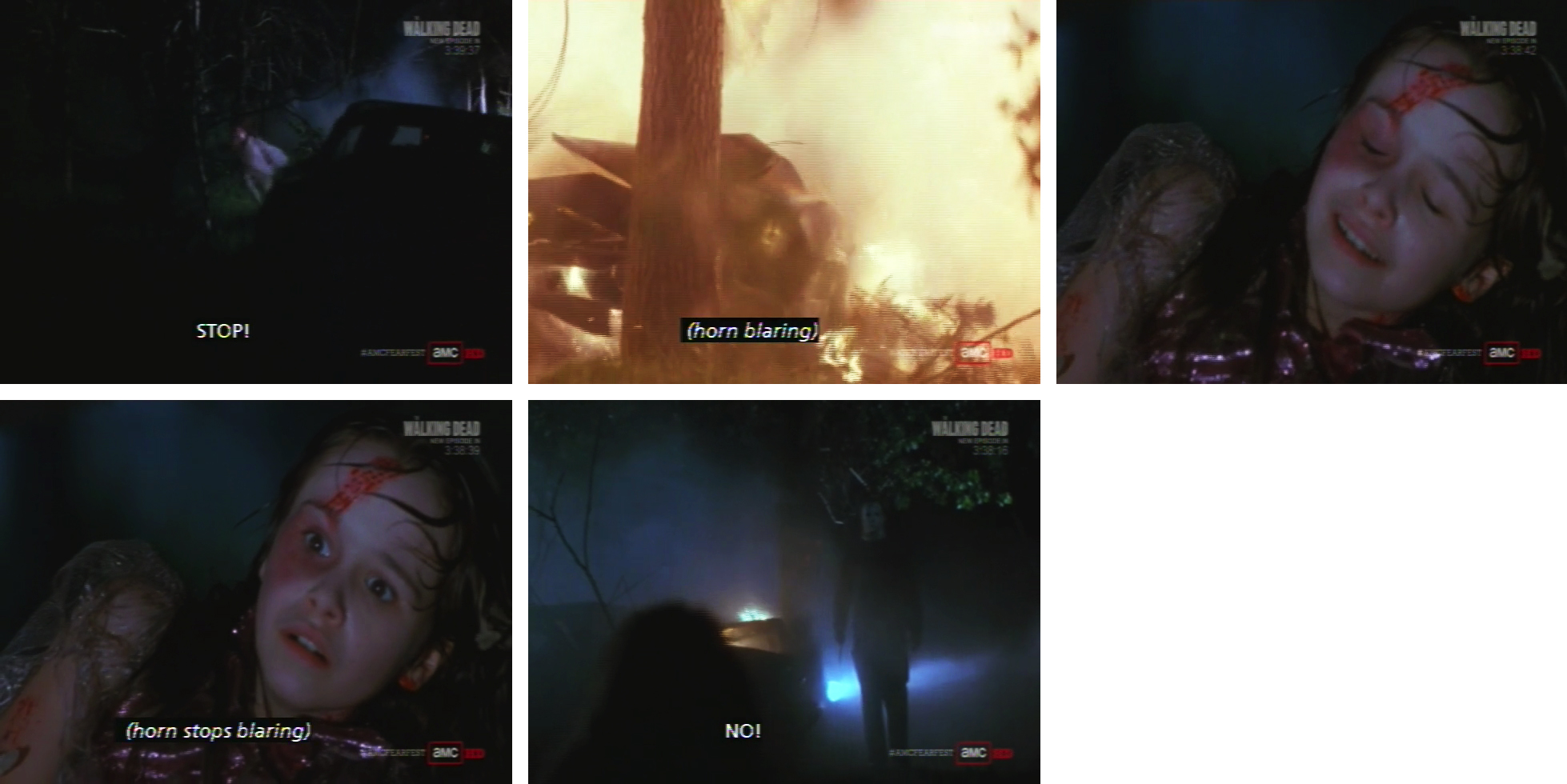 Source: Halloween 5: The Revenge of Michael Myers, 1989. Cable TV (AMC). Five frames tell the story of the bad guy’s demise and resurrection. The demise is a genre-defining lie of the horror movie. In frame one, the Michael Myers chases a little girl as she yells “Stop!” In frame 2, the Myers’ car hits a tree and explodes. The (horn blaring) tells us the bad guy is dead, his body resting against the horn. In frame 3, the girl shows a look of relief on her face, which quickly turns to alarm in frame 4 when the (horn stops blaring), suggesting that Myers is not dead at all. In frame 5, the chase resumes again as the girl screams “No!”

Source: Halloween 5: The Revenge of Michael Myers, 1989. Cable TV (AMC). Featured captions: (horn blaring) and (horn stops blaring). Note the use of a stop caption to tell us something that we can’t see (see Chapter 6).

The triumphant music suggests the alien is dead in Alien 3 (1992).

Source: Alien 3, 1992. DVD. Celebratory music (uncaptioned) is the featured element in this clip. This music assures the audience that the alien might really be dead.

Figure 7.3. A sound wave visualization of the featured clip from Alien 3, annotated according to type of sound.

Source: Alien 3, 1992. DVD. The annotated sound wave in Figure 7.3 is stitched below the video clip.

Name this sound a phone makes.

How would you caption the sound a telephone makes when it fails to connect to another line because the recipient is already on the line with someone else and there’s no automatic call-forwarding to voice mail? (I’m trying not to name the sound just yet, which is why my description is unnecessarily longwinded and confusing.) Odds are good that American listeners and British listeners will have different names for this sound.

Captioning the Doppler Effect on The Big Bang Theory (2007).

Source: The Big Bang Theory, “The Middle Earth Paradigm,” 2007. Cable TV (TBS). The imitation of the Doppler effect sound is captioned as (makes a wavering hum) and (wavering hum).

Source: Arrested Development, “Colony Collapse,” 2013. Netflix. Europe’s “The Final Countdown,” which has become a second theme song for the series itself when it returned for a fourth season on Netflix, is captioned here as (dramatic music playing).

Source: Arrested Development, official trailer for season 4. 2013. Netflix. Uncaptioned. The music for Europe’s “The Final Countdown” starts at 0:50 and continues to the end of the 95-second promo. The song has arguably become a second theme song for the series, which is why it needs to be captioned by artist and title whenever it occurs.