A close-up of Roy Miller (Tom Cruise) wearing sunglasses in a frame from Knight and Day. His head fills the entire height of the frame. Caption: “Ladies and gentlemen, please maintain visual contact.” What’s significant and ironic about the accompanying clip is that these words spoken over the airport PA are impossible to make out without captions, regardless of one’s hearing status. In other words, the only way to access these words is to maintain visual contact with the caption track. Twentieth Century Fox, 2010. DVD.

Source: Knight and Day, 2010. DVD. Featured captions include: indistinct speech sounds from the airport PA that are captioned verbatim.

Official how-to videos from Dotsub.com on transcribing and translating video

A sampling of subtitle files available on SubScene.com

In this screenshot from SubScene.com, a portion of the subtitle files available for Country Strong are shown. Of the fourteen files available in English, three are marked with an ear icon, which indicates that these files are presumably closed captioned.

In this screenshot from SubScene.com, a portion of the subtitle files available for Harry Potter and the Deathly Hallows Part 2 are shown. Six files are marked with an ear icon, which indicates that these files are presumably closed captioned.

While the movie includes some non-speech captions – indeed, the first caption of the movie is (AUDIENCE APPLAUDING) – none of the music lyrics are captioned on the DVD version. Music is identified in the captions by song title such as (BEAU BEGINS SINGING FRIENDS IN LOW PLACES) and, occasionally, by short, unhelpful descriptions such as (SINGS LINE OF A COUNTRY SONG), (RESUMES SINGING), (SINGING), and (MUSIC PLAYING). But lyrics are never captioned in Country Strong, even though the movie is, ironically, about music. The movie reaches the height of irony during the song “Words I Couldn’t Say,” which might as well be referring to the captioned lyrics.

In this compilation of frames from the first forty-three minutes of Country Strong, music titles and unhelpful summaries such as (MUSIC PLAYING) and (SINGING) do not provide sufficient access to the lyrical content of the music.

The opening scene of Knight and Day on DVD (uncaptioned)

Source: Knight and Day, 2010. DVD. Marked up with Adobe After Effects to emphasize the six musical notes that connect Cruise and Diaz together at the end of the opening scene.

The opening scene of Knight and Day on DVD (captioned)

Source: Knight and Day, 2010. DVD. Featured captions include: indistinct speech sounds from the airport PA that are captioned verbatim.

The opening scene of Knight and Day on broadcast TV

Figure 4.2. A timeline comparing the DVD captions with the TV captions for the opening scene of Knight and Day.

In this figure, the DVD captions have been placed above the timeline. The TV captions have been placed below the timeline. The DVD captions present the PA announcement verbatim, whereas the TV captions attempt to convey something of the ambience of the scene. Neither caption track accounts for the ambient music that provides an emotional register for the scene. Twentieth Century Fox, 2010. This timeline was adapted from a Microsoft Excel template. 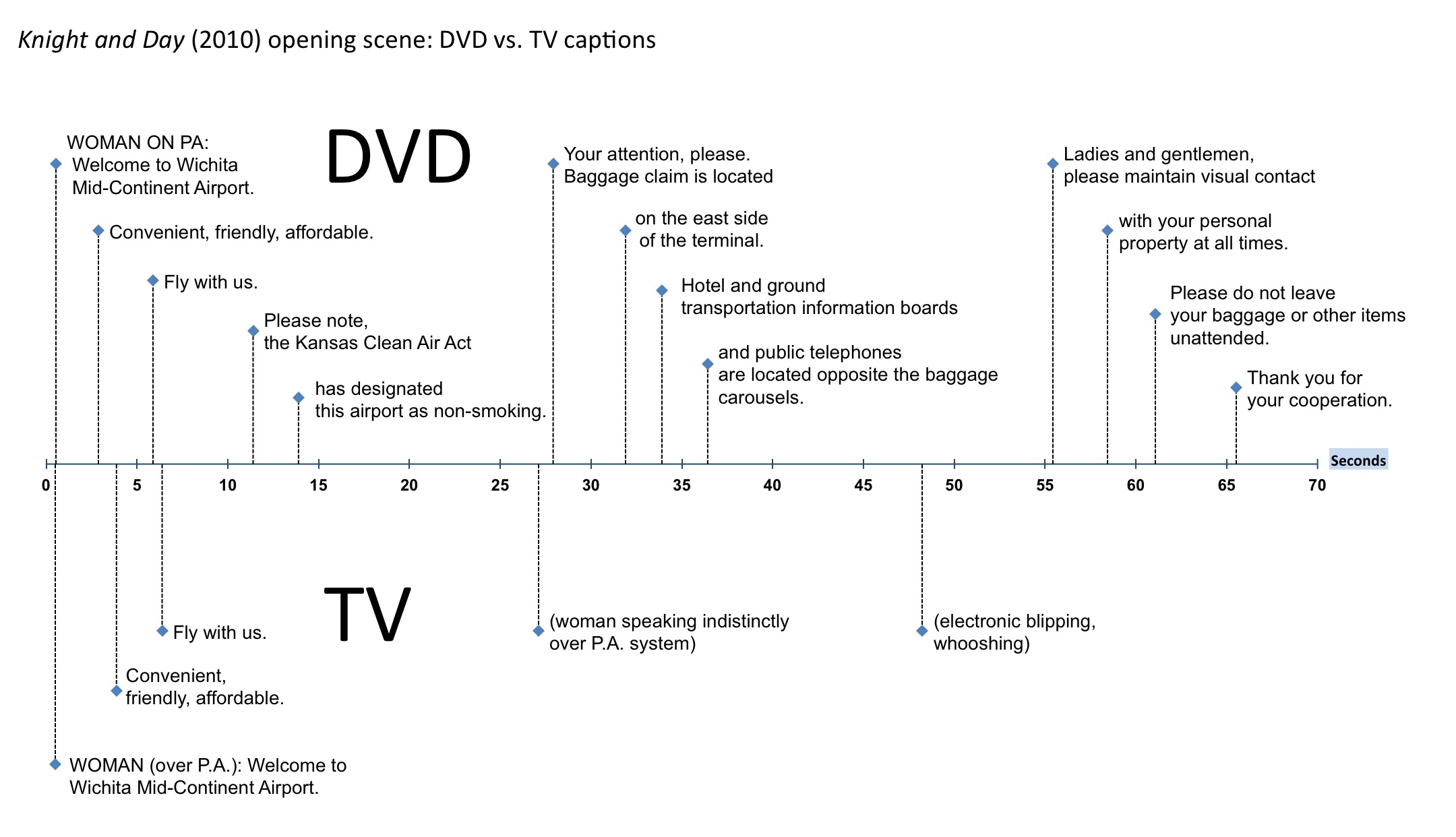 In this combined clip, the DVD captions have been inserted into the TV version to allow for some real-time comparisons. The DVD text track has been placed below the TV captions.

The PA announcement at the end of Taken

Consider the emotional family reunion at the end of Taken, a 2008 thriller starring Liam Neeson. The reunion at the airport following the rescue of Neeson’s daughter from human sex trafficking is disrupted by a captioned, incomplete, and ironic announcement over the airport’s public address system. As the family embraces and speaks to each other in person for the first time since their daughter was kidnapped and sold into sex slavery, a partially muffled PA announcement interjects on the caption layer. A question from the stepfather (“Shall we go?”) interrupts the PA announcement just as the announcer is about to tell viewers and listeners what is “not required.” The main point of the announcement is muffled as the stepfather speaks. It is not possible for hearing viewers to make out the uncaptioned spoken words of the PA. Ironically, the movie itself is about activities that are not officially “sponsored” (i.e., kidnapping, human trafficking). In this sense, then, the PA announcement is relevant to the larger themes of the movie, even if the announcement is most likely not a public warning about kidnapping or slavery. But irony should never be enough to trump a scene’s thematic intensity. Because the announcement disrupts the emotional intensity of the triumphant reunion, and its main idea is inaudible (whose activities are not sponsored?), it should not have been captioned verbatim. A complete, verbatim rendering of the announcement is impossible anyway and only leads to confusion and distraction.

Source: Taken, 2008. DVD. Featured captions include: “[Man on P.A.] Attention travelers, you are not required–” and “This airport does not sponsor their activities.”

The PA announcement in the opening scene of Whiteout

PA as narrative conscience: A compilation of examples from Whiteout

Source: Whiteout, 2009. DVD. A compilation of expository PA announcements from the movie.

The opening scene of Dawn of the Dead

Because Ana is a witness to the terrifying scene, the announcements take on an ironic cast in the opening of Dawn of the Dead. Ana is traveling (PLEASE AVOID TRAVELING…), she is outside (STAY INSIDE AND LOCK ALL DOORS), and she is presumably looking for a safe haven (MILLER PARK IS NO LONGER CONSIDERED A SAFE HAVEN, PLEASE AVOID THE STADIUM AND PROCEED TO OTHER LOCATIONS). In short, because Ana is doing everything she is being told not to do, the announcements effectively add to the sense of terror, even though they all can’t be heard clearly without the aid of verbatim captions.

The announcements are mostly clear and distinct, despite being layered and strung together as a series of interruptions. But as the music swells and the visuals become more disturbing with images of rabid and frenzied animals and insects, the announcements become increasingly difficult to hear clearly as distinct words. Towards the end of the opening scene, (INDISTINCT RADIO CHATTER) initiates a series of captions that can only be heard as ambient noise. Only caption readers have access to the specific meanings contained in these final captions. While the scene is expressly designed to thwart listeners’ attempts to remain calm in the face of growing threats, the captions provide measured and calm transcriptions throughout. Captions clarify meaning, but in doing so they take away some of the rising tension from the scene. That we can no longer make sense of what we’re hearing is conveyed in part through indecipherable announcements and belied by a series of verbatim and seemingly rational captions.

We only learn that Daisy (Laura Linney) has been invited to visit the President when she arrives at his mother’s home. No one can hear what the person on the other line is saying. The very low volume of the voice on the other end, in addition to the (DOGS BARKING), prevents Daisy and the hearing audience from hearing the full conversation. That’s the point: Daisy is lost – she says “What?” and “Sinus?” during the call – and so are we. It is thus ironic that the full conversation would be captioned verbatim on the DVD version when the scene is intended to keep the reason for the call a mystery and the conversation can’t be fully discerned anyway without the aid of a production script.

Source: Hyde Park on Hudson, 2012. DVD. Featured caption: “Now I would like you to come over, and I shall expect you this afternoon.” These words are spoken over the phone by the caller. They can’t be heard clearly over the dogs barking but are captioned verbatim.

Buster is reenlisted in the Army on Arrested Development (DVD)

Source: Arrested Development, “Forget Me Now,” 2005. Sound wave created with Audacity and marked up in Adobe After Effects.

Buster is reenlisted in the Army on Arrested Development (TV)

The TV captioner, unlike the DVD captioner, plays god, jumping ahead into the future, grabbing the verbatim speech from the second clip, and dropping it into the first clip. As a result, the joke is ruined, a joke that depends on keeping the truth from everyone, viewers and characters alike, for nearly the entire episode. We aren’t supposed to know, initially. The producers went to lengths to create uncertainty by technically overriding the performative speech act with gibberish and contextually having Buster’s mother express her confusion. The TV captioner replaces nonsense sounds with verbatim speech – indeed, the captioner inserts the very words that comprise the performative speech act and are intentionally hidden from viewers (“hereby reenlist in the armed services”). Caption viewers are now armed with knowledge that non-caption viewers do not have and aren’t supposed to have. Put simply, the TV captioner mistakenly captions speech sounds that don’t exist.

Source: Television commercials for Subaru and One A Day featuring VO and AVO speaker identifiers.

Music lyrics in the prom scene at the end of Twilight

Music captions in the opening scene of The Lost World: Jurassic Park